24 Things Turkey is Known and Famous For

Turkey is famous for a diverse set of both oriental and European elements — from the traditional Turkish tea to the majestic Hagia Sophia. It’s also famous for its carpets, hammam and bazaars, destinations like Istanbul and Cappadocia, and sweet treats like Turkish delights and baklava.

With its large landmass and unique geography, this Land of the Crescent Moon is dotted with fascinating details you won’t find anywhere else.

Last year, I traveled to Turkey with my family. To make sure we could taste a bit of everything Turkey could offer, we stayed in the country for two weeks. We were also accompanied by a good family friend who had migrated to Turkey many years back.

“Two weeks won’t be enough to explore Turkey,” she warned us. But at least, the two weeks gave us a sense of everything Turkey is famous for.

What is Turkey famous for?

Most tourists visit Turkey for Istanbul. It is, after all, the home of world-renowned structures, like the Hagia Sophia, and shopping hotspots, like the Grand Bazaar. In fact, many people often mistake Istanbul for Turkey’s capital, thanks to its prominence.

Istanbul sits across both Europe and Asia — a properly-known fact that often piques the curiosity of most people. Because of its unusual position, Istanbul boasts of an eccentric fusion of both continents.

This extends to its food; for example, a food tour that showcases both European cuisine and Asian cuisine isn’t uncommon.

Find out how many days you should spend in Istanbul and how to enjoy nightlife in Istanbul to make the best out of your trip. If you’re looking for hotels with great reviews, take a look at these options:

Considered one of the world’s greatest structures, Hagia Sophia is a cultural gem.

Built as a Christian church, Hagia Sophia eventually evolved into a mosque, and then a museum. Currently, the structure stands as a mosque again; but, tourists are still free to enter and explore it. You can get your tickets with a guided tour here.

More than its waterways, the Bosphorus strait is famously known for separating the European Istanbul from the Asian Istanbul. Through this strait, a ferry regularly travels to and fro to transport passengers to a different continent in approximately 20 minutes.

True to its name, the Grand Bazaar is known as one of the largest markets in the world.

With this, it offers a wide variety of goods: under its roof, it covers over 4,000 shops and welcomes almost half a million customers daily! Built in 1455, the Grand Bazaar is also one of the oldest markets; hence, it has become a historical treasure of Turkey as well.

Alongside the Grand Bazaar, the Spice Bazaar is also one of the most famous markets in Turkey. Evident in its name, this market sells spices, desserts, fruits and nuts, coffee, and other types of souvenirs.

Most tourists flock to the Spice Bazaar to buy Turkish delicacies by the grams.

Its prominence in postcards and works of art proves that the Galata Bridge is one of the landmarks Turkey is famous for.

Spanning the Golden Horn, the bridge makes a popular sightseeing route for tourists in Istanbul. Just below it, cafés and restaurants line up, allowing people to gather together in a quintessential Turkish manner.

Back in the day, Ephesus was a center of trade. Now, tourists visit the city to marvel at the archaeological site that holds high esteem to the Christian community.

Resembling a natural fountain, these layered pools have mineral-rich waters flowing down their terraces. Because of its snow-white appearance, this famous town in Turkey has been dubbed the “cotton castle”.

One of the most popular activities here is a hot air balloon flight over Pamukkale. Intrigued? Get a private flight with champagne and breakfast.

Nowadays, Turkey is famous as an Instagrammable country, too!

Unarguably, Cappadocia is a storybook town with its cave houses and cobblestoned roads. But most favored of all is Cappadocia’s hot air balloons — they float upon sunrise, presenting a breathtaking scene of vibrant and colorful aircraft against the spectacular orange sky.

While you’re there, join this one-hour hot air balloon flight over the fairy chimneys in Cappadocia.

Many believe that Mount Ararat was the first mountain to appear as the Great Flood (in the Noah’s Ark Bible story) receded. With this, Armenians and Christians alike consider the mountain as sacred as it symbolizes one of the greatest miracles of all time.

Snow-capped in its glory, Mount Ararat stands 16,854 feet and is the highest peak in Turkey.

Aside from its cultural landmarks, Turkey is also famous for its picturesque seaside resort towns like Bodrum, Marmaris, and Alanya. These towns boast tranquil turquoise seas, fine Turkish beaches, and exciting nightlife.

Whether you’re into luxurious retreats with golf courses and five-star resorts or into sleepy fishing villages with friendly locals, there’s definitely a seaside resort town you’ll love in Turkey.

In Turkey, offering tea is a common rule of etiquette. Whether you visit a local home or drop by a souvenir shop, expect to be presented with a glass of tea.

Typically, Turkish tea is served in a tiny glass, on a quaint saucer with sweets like kurabiye (biscuits) or Turkish delight.

The Turks have a very specific method for their coffee: They only use finely ground beans, boiling the mixture on a cezve (small pot) until it froths. Sugar, if preferred, is added while boiling.

Once the preparation is over, the coffee is poured into a kahve finjanı — a tiny porcelain cup the size of an espresso.

Turkey is famous for its baklava!

How do you spot traditional Turkish baklava among a variety of sweet, layered pastries? Look for the pieces sporting a pale yellow-green crest. This color comes from the pistachio, an original Turkish rendition of the syrupy dessert.

In CS Lewis’ The Lion, the Witch, and the Wardrobe, we witness how an innocent teenage boy practically trades his family for a box of Turkish delights. In this scene, we get a sneak peek into how luscious these confections are.

If you’re on a budget, you can score Turkish delights by bulk just outside the Spice Bazaar in Istanbul.

Iskender kebab draws its name from Iskender Efendi, who invented the recipe in the late 19th century. Today, it’s one of the most beloved dishes in northwestern Turkey.

Undoubtedly, Iskender kebab is a cut above the rest. It’s made of tender lamb, warm pita bread, hot tomato sauce, and tangy yogurt. Normally, waiters serve this savory dish hot; then, they pour over as much melted butter as the customer desires.

Turkey produces some of the highest-quality carpets in the world. In the country, every rug and carpet represents history and culture.

You will find Turkish carpets of all sizes and prices —  some are affordable and woven for especially for tourists; others are very expensive as they have been passed down from generation to generation.

Some of the costliest Turkish carpets even have royal roots!

When in Turkey, you can’t possibly miss the well-known hammam experience. The hammam is a public bath where Turks go to unwind and cleanse themselves.

The process starts with the bather relaxing in a steamed room. After perspiring, he or she then will bathe in cold water. A masseuse will then scrub and massage the bather; finally, the bather will relax in a cool room to complete the experience.

Speaking of baths, Turkey has also grown famous for its Turkish towels.

Made of premium Turkish cotton, these towels are generally high-quality: very absorbent, lightweight, and incredibly soft.

Not to mention, Turkish towels are also often minimalistic — or in millennial terms, aesthetically pleasing!

Because the Turks love their baths, it’s evident that they’re particular about what they lather on themselves, too. Typically, Turkish soap has an olive oil base and is mixed with salt and other natural fragrances.

In Turkey’s culture, the evil eye is often worn as a charm. People who wear this, usually as a bracelet or a pendant, believe that the charm wards off evil spirits and bad luck.

You can find the famous evil eye in several souvenir varieties too, such as keychains, wall ornaments, and even teacups!

A longstanding part of the Turkish religion, Sufi whirling is a meditation practice performed by Sufi Dervishes during worship ceremonies. It involves whirling (thus the name) as a representation of the planets orbiting the sun.

Back in the day, Turkey culture prohibited women to participate in the Dervish dance. But with the growing modernization and secularization of Turkey, some communities now allow women to take part in this culture.

The Turks value cats so much, it’s astounding!

In fact, it’s common to find cat houses and cat food lining the streets of Turkey. The worth the Turks place on cats isn’t without reason — cats have a high place in their society because they are traditionally considered ritually clean and sacred.

Mustafa Kemal Ataturk, the known founding father of Turkey, served as the first president of this young nation. He held his position from 1923 to his death in 1938.

Through Atatürk, Turkey transformed into what it is today: a modernized democratic state — industrial, secular, and progressive.

What is Turkey famous for? – Pin it!

20 thoughts on “24 Things Turkey is Known and Famous For” 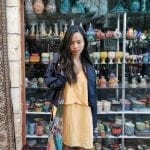 Written By Danielle Uy
Gabrielle is most passionate about traveling — whether through worlds or through words. If you can't find her geotags, expect that she's right at home, with her nose buried in a book (or two).