Nestled within the southeastern region of the United States, Kentucky is known for some of the richest cultural traditions in the country. As part of the Bible Belt, a series of states heavily rooted in conservative Chrisitan religious values, this state boasts many deep traditions. From rich southern comfort foods like fried chicken, to a long-standing tradition of horse racing, there are many things that separate Kentucky from other states in the region.

When asked “what is Kentucky known for,” many people might answer with a series of alcoholic beverages or national pastimes like baseball and tobacco production. With an extensive role in the events of the Civil War and plenty of lasting American inventions to boot, it’s not hard to wonder what Kentucky is famous for across the globe.

Let’s dive into the list of 16 things Kentucky is known and famous for.

Kentucky is famous for Mammoth Caves National Park. The park boasts an intricate cave system several hundred miles long. Not surprisingly, this is the longest known network of caves in the entire world!

Adult tickets range from $7.00 to $20.00, depending on which type of tour you take. Seniors and children receive ticket discounts and they have guided tours, as well.

Worldwide, Kentucky is famous for the popular fast food brand KFC (Kentucky Fried Chicken). In fact, the best KFC restaurant I’ve been to is located in Ireland. The chain is most known for the classic fried chicken. However, it expanded its menu over the past few years.

No one knows for sure what the spices are in the chicken batter. There are many recipes online claiming to have the same ingredients. But, KFC has vowed to keep its recipe a secret under lock and key.

As a result of the KFC craze, the founder also became famous. Harland Sanders founded KFC in the 1950s. He didn’t live a fancy life before his success with KFC. Consequently, once the brand took off globally, Sanders sold the company.

After he sold KFC, Sanders remained the “mascot” for the brand and is part of the marketing branding to this day. His image is the popular face of KFC worldwide. Colonel Sanders is sure to top the list of responses when asked “what is Kentucky known for?”

The reason why almost all bourbon comes from Kentucky (95% by most estimates) is because of the water. Kentucky’s widespread limestone deposits act as natural purifiers. Because the water filters out metallic iron flavors, Kentucky bourbon is sweeter.

Bourbon is a specific type of whiskey. There are several stipulations that make the distinction between the two. The most obvious being that whiskey is made all over the world, while bourbon only comes from the United States.

Kentucky is known for one of the messiest sandwiches on the planet, the hot brown. While there are several variations on this classic, it hasn’t strayed too far from the original recipe.

Essentially, a hot brown is an open sandwich with lean meat (think chicken or turkey), cheese sauce, and several toppings (usually including tomatoes and bacon). If you ever go to Kentucky, you have to try one!

Ask any true music connoisseur “what is Kentucky known for” and they’re sure to answer “bluegrass!” The mountains of Kentucky gave birth to this musical genre. As Europeans immigrated to the US, they began to develop a new culture.

In the south, many foreigners used music as a creative outlet. As a result, this type of country music developed from the new experiences of these migrants. Bluegrass lyrics often talk of home, the simple joys of life, and the southern landscape.

The University of Kentucky is one of the major teams in college basketball. The school has won more basketball games and tournaments in the NCAA (National Collegiate Athletic Association) than any other team.

The Kentucky Wildcats are well-known for their blue and white colors. A ticket to one of the team’s games costs nearly $100 on average.

No one does horse racing better than Kentucky. According to Kentucky Horse Park, the state is made for horses to thrive. To clarify, naturally-occurring limestone provides the ground and grass with many minerals. When horses eat the grass, they reap the benefits of the soil.

The Kentucky Horse Park even has a museum for horses. It’s called the International Museum of the Horse and it’s located in Lexington. Check out their website here.

The Kentucky Derby is the most famous horse race in the United States. Each year, roughly 150,000 people attend the race in-person. This number doesn’t even include those who watch the race online.

The race takes place at a famous track called Churchill Downs. On May 17th, 1875, the very first Kentucky Derby took place. Because it has been running for more than a century, the derby is the United States’ oldest sporting event.

One marker of the Kentucky Derby is the fashions that people wear. Among women, it is very possible to wear large hats and sundresses with heels. Although not everyone dresses up, those wishing to get the full experience try to look like the picture of southern charm.

A clubhouse ticket to the event will cost you a couple of thousand dollars. The race track also sells general admission tickets for a much cheaper price.

A staple of Kentucky’s culture is none other than moonshine. Moonshine doesn’t refer specifically to a type of alcohol. Rather, the term “moonshine” speaks to the fact that the beverage is made illegally.

Even more specifically, moonshine demonstrates the very fact that this type of alcohol was brewed at nighttime, when police were less likely to discover or arrest brewers. Kentucky is famous for moonshine as one of the strongest, most potent alcoholic beverages in the United States.

Kentucky is known for its historic role in Major League Baseball. In the mid 1800s, a man named Frederick Hillerich moved from Germany to the state of Kentucky with his family. After Frederick opened a woodworking shop, his little son, Bud, learned how to make his own baseball bats.

When Bud was young, he made a bat for a local baseball player named Pete Browning whose nickname was “Louisville Slugger,” and the rest is history. Over many years, Bud perfected the process of making bats and the company quickly adopted Browning’s nickname as its own.

Kentucky is famous for Louisville sluggers, some of the best baseball bats in the world. In fact, famous country music singer Carrie Underwood mentions the brand by name in her popular song “Before He Cheats.”

You can check out the website for the company and its museum, which has the world’s tallest bat, here.

Among the south, Kentucky is known for Ale 8, a soft drink. Technically speaking, Ale 8 is available in several states, including Alabama, Tennessee, and Georgia. But, it is difficult to find the drink in most places, as the majority of it is sold in Kentucky.

George Lee Wainscott invented the drink in the 1920s and began selling it in his home state of Kentucky. It comes in green glass bottles and has a sharp ginger taste.

Kentucky is known for its great coal reserves. Dr. Thomas Walker discovered coal in the state in 1750 and Kentucky was never the same. Coal production wasn’t commercialized in Kentucky until 1820 with the opening of the Mclean Drift Bank mine. By the late 1800s, the state’s miners had dug up more than a million tons of coal.

Today, as the world moves to “cleaner” sources of natural energy, coal production is slowing down. In fact, Kentucky is one of three states responsible for sixty percent of the entire country’s abandoned coal mines.

Kentucky is famous for this dense stew, which originated in the 1700s. While the exact origin hasn’t been verified, several reports say the first versions of burgoo used birds as the primary meat.

At the heart of the burgoo recipe is improv. That’s because there is no official recipe for this meal. In fact, most recipes vary widely in the ingredients included in the stew. However, meat and vegetables are required as general guidelines.

Fun fact: the winning horse in the 1932 Kentucky Derby was named Burgoo King, after the famous Kentucky dish.

Kentucky has a long history of tobacco production. Typically, kentucky leaves are hung upside down inside a large barn and dried out. Then, the leaves are sold to companies that make products like chew or cigarettes. In the 1990s, tobacco made up a quarter of the state’s entire agriculture sector.

Any whiskey lover is familiar with Jim Beam. After all, the company started more than 200 years ago. Jim Beam is as old as the state of Kentucky itself. In the true spirit of the American Dream, the Beam family came to America from Germany in the mid 1700s.

After taking part in a government subsidy program to grow corn, the family began distilling bourbon and selling it by the end of the 18th century. Like many bourbon brands, Jim Beam ownership and production has remained within the same family for generations.

Monica believes the world is a puzzle--only the image changes regularly and is in need of constant need of rearrangement. She is a freelance lifestyle writer who enjoys sharing her experiences and travels with the world, while working professionally as a supply chain manager. 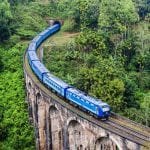