20 Things Baltimore is Known and Famous For

When you think of East Coast cities, Baltimore may not be first on your list. But this city is filled with unexpected beauty and rich history. I mean, they don’t call it “Charm City” for nothing.

Baltimore is famous for many things, including being the birthplace of the National Anthem, the home of the Ravens and Orioles, and the city with the best crab cakes. It’s been featured in pop culture classics ranging from The Wire to Hairspray.

Let’s take a look at the 20 things that make Baltimore famous.

There are many sports teams in Baltimore, but the Ravens reign supreme. This NFL team started out as the Baltimore Colts in 1953, but eventually became the Ravens we know today in 1996.

Since then, the Ravens have won two Super Bowls, mostly thanks to their strong defensive play. The team plays at M&T Bank Stadium, a mecca for any Baltimore sports fan like me.

Speaking of ravens, Baltimore is known for being the resting place of American poet Edgar Allan Poe. While he wasn’t born here, he did spend much of his career in Baltimore and unfortunately met his demise in this very city.

Poe’s popular poem “The Raven” served as the inspiration for the local NFL team. The symbol of the raven has long been associated with both Poe and the city of Baltimore.

The Ravens aren’t the only bird-themed sports team in town. The Baltimore Orioles are the local MLB team for the city. In addition to their adorable mascot, the Orioles are known for their iconic ballpark: Camden Yards.

Their most famous player in recent history would have to be Cal Ripken Jr. But Baltimore is also known for being the birthplace of baseball great Babe Ruth. Ruth played minor league for the Orioles before being traded to the Red Sox.

When you think of Baltimore, the Inner Harbor is probably the image that comes to mind. The Harbor is a historic seaport and tourist attraction located in the center of downtown.

Whether you visit the Baltimore World Trade Center, explore the local shops, or paddle through the harbor in a dragon paddle boat, there’s something for everyone.

Baltimore is famous for having one of the most impressive aquariums in the country. The National Aquarium boasts 2.2 million gallons of water and showcases 750 different species.

Spend the day marveling at the multi-story Atlantic Coral Reef, wandering the Upland Tropical Rainforest, and exploring Shark Alley. I’ve been coming here since I was a child, and I uncover something new and exciting with every visit.

Many know the city as Baltimore, but ask any local and you might get a slightly different pronunciation. The middle syllables tend to run together and the name simply becomes “Bawlmer.”

This pronunciation and linguistic style is distinctly unique. It may sound similar to a Philly accent, but any true Baltimorean can spot the difference from a mile away.

In addition to the unique accent, Baltimore is known for one specific word: hon. This term of endearment is short for “honey,” and you’ll hear it all over southern and southeast Baltimore.

There’s even a popular restaurant called Cafe Hon that is recognizable by its flamboyant style and giant flamingo statue.

Flamingos, pastel colors, and over-the-top hairstyles all became staples of Baltimore culture thanks to John Waters. Born and raised in Baltimore, he wrote, directed, and produced a string of cult classics.

His most famous work Hairspray is set in Baltimore in the ’60s. It eventually became a critically-acclaimed Broadway play.

If Hairspray shows one version of the city, then The Wire shows a completely different one. This popular HBO show dives deep into the harsh realities of life in Baltimore.

Creator David Simon was a police reporter in the city, and he wrote the show based on some of his experiences. While The Wire was definitely not the brightest depiction of the city, it did open people’s eyes to the struggles of urban life.

If there’s one food that Maryland is known for, it’s crabs. Baltimore is certainly no different. Blue crabs are found all over the city, especially in the summer months.

Whether you have it in a crab cake, baked into a dip, or just freshly steamed from a crab boil, crab is definitely a must-eat. I know that cracking open a whole crab may seem intimidating, but it’s a rite of passage in Baltimore.

Nothing goes better with crab than a healthy serving of Old Bay. This unique blend of spicy, sweet, and salty seasonings has become a cult favorite among Baltimoreans.

Old Bay lovers will instantly recognize the iconic yellow can with the red shaker top. It’s mostly used on seafood, but my favorite way to eat Old Bay is on an Utz Crab Chip. It’s the ultimate beach snack.

If you have more of a sweet tooth, then Baltimore has you covered. One dessert that you have to try in Baltimore is definitely a Berger cookie.

These soft, chocolate-slathered morsels are made by the DeBaufre Bakery in the Cherry Hill neighborhood of the city. They still use the original recipe from Henry Berger that dates back to 1835.

“The Star Spangled Banner” is the quintessential all-American tune. Even though it represents the entire United States, it was written right here in Baltimore.

During the Battle of Baltimore in the War of 1812, Francis Scott Key wrote this classic song. He was inspired by the giant flag flying over Baltimore’s Fort McHenry.

Baltimore is known for many things in modern culture, but this city also has a rich history. One famous figure who helped shape the city of Baltimore is Johns Hopkins.

Today, you’ll see the Hopkins name all over Baltimore. Johns Hopkins University is located here, as is the Johns Hopkins Hospital. Both are well-respected institutions that regularly receive national acclaim.

Hopkins gained much of his wealth by investing in local businesses, including the Baltimore and Ohio Railroad. The oldest railroad in the United States, the B&O was opened in 1830. Like the name suggests, it connected Baltimore with the Ohio River.

While most may know it only from the board game Monopoly, the B&O railroad played a crucial role in transportation in the late 19th and early 20th centuries.

There are many impressive pieces of architecture in Baltimore, but none is more iconic than the rowhouse. These connected homes are found in neighborhoods all over Baltimore.

There are many different styles of rowhouse, depending on when they were built. Taking a tour of the different architectural styles is like walking through a time capsule of the city.

There are many different Italian neighborhoods across the US, but Baltimore’s Little Italy is definitely one to note. Full of delicious bakeries and charming restaurants, this adorable neighborhood is conveniently located right near the Inner Harbor.

If you’re visiting during the summer, don’t miss the annual Feast of Saint Anthony. It’s an outdoor food fair that’s been going on since 1904.

Every city seems to have their signature drink, and Baltimore is no different. National Bohemian beer, nicknamed Natty Boh by the locals, is a lager beer originally brewed in Baltimore.

Although it’s no longer brewed in the city, the beer has remained a local favorite. Its mascot, the mustachioed Mr. Boh, is a common sight around the city. You’ll see him on bumper stickers, flags, signs, and even tattoos.

If you know anything about horse racing, then you know the importance of the Triple Crown. Baltimore is famous for hosting the second race, the Preakness Stakes, at the Pimlico Race Course every year.

While those in the stands are known for their big hats and cocktail dresses, the infield crowd has a completely different vibe. The Preakness InfieldFest is known for being a rowdy summer party with unlimited beer and exciting musical performances.

You’re probably familiar with this popular sportswear brand, but did you know it started in Baltimore? Founder Kevin Plank launched the company out of his grandmother’s basement.

While the company started from humble beginnings, it is now worth billions. Under Armour products are found all over the world, but the global headquarters is still right here in Baltimore.

This list covers a lot of things that Baltimore is known for, but there’s always more to explore. Did we miss anything? Let us know in the comments.

3 thoughts on “20 Things Baltimore is Known and Famous For” 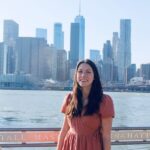 Written By Sarah Cookson
Sarah is an American writer with a passion for travel. She’s been to over 20 countries and loves trying the local street food in each place she visits. When she’s not eating or writing, she can be found petting every dog in sight.