Are you wondering how many days in Florence will be enough?

This article will give you the answer to that question, and more. Get help with planning your Florence itinerary, find out the best time to visit Florence, and learn tips for getting around the city. With this guide, you’re five steps closer to having a great stay in the Tuscan capital!

How many days in Florence?

How long should you spend in Florence? 3 days in Florence is enough to see the main attractions such as Piazza Duomo and Ponte Vecchio, visit museums and art galleries at a leisurely pace, and sample lots of gelato!

Planning your trip to Florence

Florence is the capital of the Tuscan region, known as the birthplace of the Renaissance and one of the most beautiful cities in both Europe and the world. It’s also known for being Dante’s hometown. It houses dozens of masterpieces by legendary Renaissance artists, such as Michelangelo, Leonardo Da Vinci, Botticelli, Rafael, Donatello, and many others.

If you visit between May and June, you’ll be able to enjoy the warm weather and everything nice that comes with it, like open-air dining and spring festivals.

For your first (and perhaps only) 24 hours in Florence, I’d advise you to start your day by visiting Piazza del Duomo, the most famous place in Florence. Here, you can see the Cathedral, the Campanile de Giotto, and the Battistero di San Giovanni.

The Cathedral of Florence (known locally as the Duomo) is one of the largest Christian churches in the world. It has a refined white marble façade and a 45-meter-diameter dome built by Filippo Brunelleschi, whose resting place is a small crypt near the entrance to the cathedral.

The Campanile di Giotto is the beautiful bell tower of the Cathedral of Florence. It is considered one of the most beautiful in Italy thanks to its colorful and harmonious proportions. The tower has a white, green, and red marble coating similar to that of the cathedral. In the upper area, several niches are occupied by statues of saints and prophets – copies, whose originals can be seen in the Museo dell’ Opera del Duomo.

Standing in front of the cathedral is Battistero di San Giovanni, the oldest building in Piazza del Duomo. It’s covered in white and green marble. Inside, you’ll find the Byzantine mosaic of the dome, whose golden colors resemble those of St Mark’s Basilica in Venice, as well as the tomb of antipope John XXIII, whose tomb was designed by Donatello and his disciple Michelozzo Michelozzi.

On your second day in Florence, I recommend you visit Piazza della Signoria, the center of civil power and the most lively area of Florence. During the Roman Empire, the square had a thermal installation. In the early Middle Ages, the baths disappeared and the square was gradually taken by artisans.

In the square is Logia dei Lanzi, a small open-air museum with several sculptures, such as The Abduction of the Sabines or Perseus with the head of Medusa. Also, the Fountain of Neptune, built by Bartholomew Ammannati and his disciples, and the equestrian statue of Cosimo I.

The most characteristic building in the square is the Palazzo Vecchio. With its castle appearance and 94 meters high tower, it is one of the symbols of Florence. The palace was built between 1299 and 1314 to be used as the place of residence and work of the republic’s officials. At the entrance to the palace, you can see two large statues: on the left, a copy of Michelangelo’s David, and on the right Hercules and Kermit (sculpted Baccio Bandinelli).

Not too far, you’ll find the famous Ponte di Vecchio, the symbol of the romanticism that immerses all of Florence. The origins of the “Old Bridge” date back to the year 1345, which makes it the oldest stone bridge in Europe. In the 15th and 16th centuries, their suspended houses were occupied by butchers, but when the court moved to the Pitti Palace, Ferdinand I had the trades closed because of the unpleasant smell. Since then, the shops have been occupied by jewelers and goldsmiths. During World War II, the Ponte Vecchio was the only bridge in Florence not destroyed by German troops.

End your day at Piazzale Michelangelo, one of the best places to contemplate Florence in all its splendor. In this square, in addition to a bronze replica of Michelangelo’s David, you will find a restaurant and cafeteria, along with several stalls where you can buy ice cream.

If you can afford to stick around for a third day, then go ahead and visit Basilica di Santa Croce, the world’s largest Franciscan church, and Florence’s own pantheon. It houses nearly 300 tombs, including those of Michelangelo, Machiavelli, and Galileo. In its chapels, you can see frescos by artists such as Giotto, Brunelleschi, or Donatello.

The Uffizi Gallery houses one of the richest and most famous collections of paintings in the world. The painting rooms are arranged chronologically, the most famous part being the Italian Renaissance, with works by geniuses such as Botticelli, Leonardo da Vinci, Michelangelo, Raphael or Titian.

While in the artsy mood, why not look around Galleria dell’ Accademia, too? It is the second most visited museum in Florence, and famous for having in its interior the masterpiece of Michelangelo: the sculpture of David, carved in white marble 5.17 meters high that represents David before facing Goliath.

Found behind the Pitti Palace, the Boboli Gardens are the biggest green zone in the city of Florence, occupying an area of 45,000 square meters. To stroll through this garden is to glimpse at the Médicis history, the family which occupied the property in the mid-sixteenth century. The gardens were open to the public in 1766 and its main attraction is the amphitheater, with its Egyptian obelisk, which was brought from Villa Médici, Rome.

In case you’re staying in Florence for more than three days, then you should explore beyond the city limits.

Perhaps ride to Pisa, an ancient port city known all over the world thanks to its peculiar steep tower, or Cinque Terre, composed of five incredible villages that form one of Italy’s greatest treasures.

Here are a few other options for day trips from Florence:

If you are staying near the historic center, you will not need to use any means of public transport for the entire journey, as Florence can be explored on foot.

Still, there are almost 100 bus lines, including a special night service called “Nottetempo”, which operates from 10pm to 2am and runs through different neighborhoods of the city.

There is also a tram which was inaugurated back in 2014, but it is not a very beneficial option, since none of its lines pass through the historic center.

Appreciate the street artists: You don’t really need to step inside a museum to witness some great visual art; you’ll likely stumble across many artists working right on this city’s streets.

Bring some cash: In this region, ATMs charge high fees on withdrawals so it’s best to bring some cash from your home country.

Explore Tuscany: With the vineyards so close to Florence, it’s nearly criminal not to go beyond the city limits.

Is 1 day enough in Florence? One day is enough to see the city’s main attractions but you’d surely miss out on the historical masterpieces. You simply won’t have time to visit all the famous landmarks and museums.

Is 3 days enough in Florence? Yes, 3 days is the ideal amount of time to explore Florence, especially if it’s your first visit. You can enjoy the city’s main landmarks, museums and other attractions, while visiting lesser-known spots.

Is 5 days in Florence too long? 5 days gives you plenty of time to visit Florence at a leisurely pace, hitting up all the main sights while also seeing the city through the eyes of a local.

How many days in Florence is enough? – Pin it! 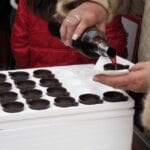