20 Things Indiana is Known and Famous For

Have you ever been curious about the Midwest? Well, look no further than Indiana, the state known as the “Crossroads of America.” Usually overlooked as the state you have to drive through, Indiana has developed into a worthy travel destination for just about anything.

Indiana is famous for its southern sensibilities, basketball, saying the word “ope,” and hosting the greatest spectacle in motor racing. It is also known as corn country; the land is flat and full of farmland being worked on year-round.

However, Indiana is not just about farmland and manufacturing anymore – we have world-stage attractions, one-of-a-kind food, and so much more!

Let’s discover the 20 things that Indiana is known for.

Begin your Indiana adventure by visiting the capital city Indianapolis.

Here you will be acquainted with the first nickname for Indianapolis, Indy. There are many other nicknames locals give to Indianapolis because of its rich history.

Indiana was famous for also being named “The Crossroads to America,” and “Railroad City” because Indiana was a transportation and shipping hub for products moving across America.

Indiana is known for its vast farmlands.

As soon as you exit the city into the suburbs or rural areas, you will be surrounded by farmland. Indiana grows a plethora of crops; corn, soybeans, watermelons, tomatoes, mint, and tobacco.

Do be sure to take a drive through the countryside if you get the chance. Indiana is famous for its flat land; you can see the entire countryside disappearing into the horizon.

Indiana is known for having a complete weather cycle.

Although this sounds harsh, this temperature range makes spring and fall one of the most beautiful in America. During fall you can find big brown and dark red leaves to jump into, while in the spring, the colors of blooming flowers are breathtaking.

An important note about visiting Indiana and the weather is to make sure to pack the right clothing!

4. Home of the Hoosiers

The residents of Indiana are called Hoosiers. This word comes from a poem by John Finley, “The Hoosier Nest.”

Unrelated to the poem, Hoosier is defined as “a man who carries corn.”

The word was used to describe Indiana men who transported corn across America. Over 150 years ago Indiana adopted this name as the nickname for its residents.

There’s a local saying Indiana is famous for, “no one in this state is born without knowing how to play basketball.”

Indiana is known as the basketball capital of the world, according to its residents of course. The Indiana Pacers have been a longstanding point of pride for Hoosiers.

This has led to an interesting phenomenon within the Indiana basketball community. For some reason, Indiana has become known for rivaling every major basketball team since Reggie Miller played for the Pacers in 1987.

Reggie gave the city its basketball pride; we stood up against the big city New York Nicks, then it was Detroit and the tough Pistons, and now, we seem to follow LeBron James wherever he goes.

For the fitness-lover look no further than the Monon Trail. An old train route transformed into the state’s biggest walking trail, Indiana is famous for this 26-mile long asphalt trail starting in northern Indianapolis and moving into the downtown area.

There are many access points to enjoy this trail, with numerous stops along the way that can generate another “Top 20” list.

Indiana has small, hometown characteristics, but what Indiana is famous for internationally is the Indy 500. Also called “The Greatest Spectacle in Racing,” the Indy 500 is a 500-mile race with speeds reaching over 250 miles per hour.

Every year during Memorial Day Weekend, Indiana hosts the Indy 500 at the Indianapolis Motor Speedway. The Motor Speedway hosts many other types of racing, including Formula 1, Moto GP, Drag racing, and many others.

The track itself is so big there is a golf course on the inside!

Indiana is famous for its cultural center located within Indianapolis called Mass Avenue, in short, Mass Ave. Here you will find murals coving the sides of buildings, street art, and live music.

This street is mainly known for its many festivals throughout the year, some advertised or some thrown together at a moment’s notice.

The magic of Mass Ave is not knowing what will happen on the day of your visit. There might be a parade, a live band, or a community art project that you may even get to contribute to.

A place of wonder and excitement, the Children’s Museum experience is always hard to forget.

Indiana is famous for having the largest Children’s Museum in the world. There are five floors of interactive history and science, the themes of which rotate annually.

When you first walk into the Children’s Museum, you will notice North America’s largest water clock. This clock is completely powered by water, and uses the water itself to tell time!

If you want to branch out of the city and journey into local areas, a small town on the edge of Indianapolis you must visit is Broad Ripple.

This town is a local hotspot full of one-of-a-kind restaurants including Broad Ripple Bagel and Deli. Their specialty is simply anything you want to eat, but it will be served on a bagel.

Broad Ripple also has nightlife with a little bit of everything. Many bars allow you to sample home-brewed Indiana beer, most likely made by the residents of Broad Ripple.

Most importantly, Broad Ripple is a small hub for passing bands. Bars and nightclubs host different live bands every weekend.

Indiana is famous for being the home of Holiday World & Splashin’ Safari, a ginormous amusement park that has the biggest water park in America. Located in Santa Clause, Indiana, Holiday World has over 50 attractions.

America’s top wooden roller coaster, the Voyage, is located here and has a steep 70-degree drop! If you are a fan of amusement parks, Holiday World is the place to go.

A somewhat unfamiliar phrase that is very common in Indiana is the expression “ope.” If you listen closely, you will hear this word in place of the phrase “excuse me.”

This small word represents how Indiana is known for its hometown sensibilities. For example, let’s say two locals are talking on the sidewalk, and you need to get by. When these two locals see you they will say, “ope,” separate, and let you by with a smile.

It’s a small funny phrase if you listen for it, and all it means is a Hoosier doesn’t want to get in your way.

Located just underneath Brown County State Park, it’s a fabulous destination in its own right; Little Nashville is a small town meant to copy the real city of Nashville. Here you can walk around and visit local shops that carry everything from homemade foods to homemade toys!

Indiana was not given the name, “Crossroads of America,” lightly. A local saying is, “you can never get lost in Indiana,” because all major highways lead straight to Indianapolis.

This means you can access any area within the state and have a direct link back to the state capital. This allows for easier travel throughout the state without the worry of getting lost.

Indiana is known for its state parks that offer a wide range of activities to nature-lovers of all kinds. The three most popular parks are Eagle Creek Park, Brown County State Park, and the Indiana Dunes State Park.

A somewhat obscure hobby Indiana is famous for is called geocaching.

Enjoyed by local Hoosiers, Geocaching is where you download an app that tells you where a “geocache” is located. Your job is to go find the geocache box and look inside!

Most Geocaching takes place at state parks where you’ll be walking through the woods. When you find the box, you’re allowed to take something from the box, but you must also leave something for the next traveler in search of the geocache.

Indiana is famous for its living museum called Conner Prairie.

Located outside of Indianapolis, Connor Prairie will transform you back into colonial times. You can take a candlelit tour where you will learn what it was like to live in the 1800s. There are also monthly “Taste the Past” events where you will be made a pilgrim dinner.

During the summers, there are also war reenactments in remembrance of Indiana’s battles during the Civil War. Conner Prairie is an excellent destination if you are interested in Indiana’s colonial history.

Johnny Appleseed is the name of a man in one of America’s folk tales. Legend has it that he walked across America planting apple seeds, and that is why today there are apple orchards in America.

Though the story may be false, there was a real Johnny Appleseed who lived in Indiana and had many apple orchards!

Indiana is famous for being the origin of the Johnny Appleseed legend. He was a pioneer born in 1774 and died in 1845. His apple orchards are still in use today and span over 1,200 acres across Indiana.

There are some Hoosiers that say a restaurant is no restaurant at all unless they serve pork tenderloin sandwiches.

Originating in a small farming town, Indiana is known for creating the pork tenderloin sandwich, and if you ask any Hoosiers, they’ll say Indiana makes the best ones.

What is interesting about this sandwich is its size. Using a regular hamburger bun, you place the fried pork tenderloin between the two buns, while 90% of the sandwich sticks out from the side.

Speaking from experience, it’s pretty darn good and you should make sure to order one.

Indiana is known for its southern hospitality; the best place to experience this is in Madison, Indiana. Located way down south just north of the Ohio River, Madison sits right on the edge of the water.

With numerous crab shacks, burger joints, and old antique shops, the food alone in Madison is worth the visit. However, you can also tour old buildings and enjoy numerous antique shops holding hidden treasures.

I hope you have a chance to visit Indiana and everything it has to offer. Indiana is not known for turning people away; rather we want you to spend time and appreciate what Indiana is famous for.

What is Indiana famous for? – Pin it!

40 thoughts on “20 Things Indiana is Known and Famous For” 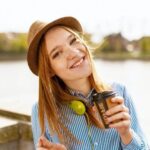 Written By Kayla Brown
Kayla is an avid traveler and frequent flyer from Michigan. She loves jetting off to off-the-beaten-path destinations. Her job as an English tutor gives her the freedom to be a digital nomad.